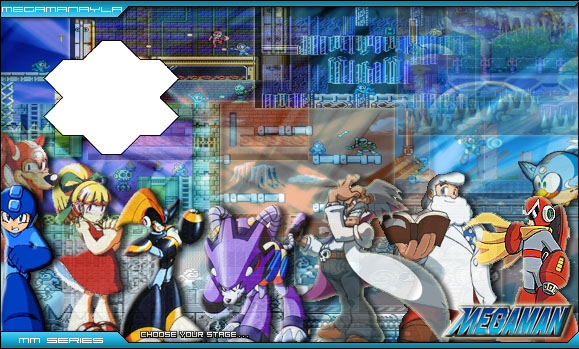 A mysterious individual known as Mr. X has begun to hold a robot tournament encouraging all robots in the world to enter, to discover the true masters of them all. Unknown to the robots, once the eight winners were chosen, Mr. X took control of them and began to use them in his plot to take over the world. Explaining that he had manipulated Dr Wily from the beginning, Mega Man must now face up to Mr. X's eight new Robot Masters before confronting the mastermind himself. Two new armor suits will help Mega Man out during the game, as well as trusty Rush and the robotic bird Beat. Below you'll find a boss chart, weapons, special items and Rush ability descriptions, as well as the Beat icon locations and the final passcode.

Intro Scene:
In the year 20XX AD... The 1st annual robot tournament was held with eight of the world's most powerful robots. But... Mr. X, the sponsor of the tournament, took control of the robots and began to take over the world.
Mega Man: Mr. X!! Why!?
Mr X: It's time to tell you the truth. I have been manipulating that fool, Dr Wily from the beginning. But now I no longer need Dr Wily's help. Come and face my power Mega Man!!
Mega Man: We'll stop you! Follow me, Rush!

Story:
The mysterious Mr. X hosts the first ever Robot Master design contest.
People from all over the world are invited to come and pit their creations against each other in a battle tournament. When the robot finalists are down to eight, Mr. X makes a startling announcement.
Mr. X declares that the entire contest was a hoax, and that he used it to gather robots to use to take over the world. He claims to have been “manipulating” Dr. Wily this entire time (which sounds plausible), but in the end Mr. X reveals himself to be none other than the infamous evil scientist himself.
General Hints:
Some of the stages change color schemes evidently depending on whether you have found their Beat parts or not. This would be a handy cue except that you can tell just looking at the stage select screen, which is faster anyway.
Special Features:
Mr. X, huh? What’s with the “X”s lately, anyway?
This game was licensed exclusively to Nintendo, and I think Nintendo did the manual and the box because one, Capcom isn’t really mentioned anywhere, and two, they’re a lot different than the other games’. Mega Man 6 doesn’t seem to be quite as good as the others; I think they rushed to get it out before the 8-bit Nintendo died, which I can understand seeing how abruptly it did so.
Rush Items:

Rush Power Adaptor:
You will receive this once you defeat Flame Man. This adaptor will allow Mega Man to equip a much stronger weapon. This can fire off a normal blast and can also use charged-up shots which are strong enough to destroy some crumbling walls.

Rush Jet:
You receive this after you defeat Plant Man. This will allow Mega Man to hover in the air for a short time and this can also be used to fly up to higher platforms or to fly over dangerous areas.

Energy Equalizer:
You'll find the Energy Equalizer in Tomahawk Man's stage. Eventually you'll reach a point where two ladders lead up, go up the left ladder to find a cracked block just below another ladder leading skyward. Use the Rush Power Adaptor's charged punches to break through the block, then head through to claim the item from Proto Man. As always, this handy item allows you to recharge the weapon with the lowest energy whenever you pick up a weapon refill capsule.

Beat Icons:
In this game there are the icons, B, E, A and T to find before you can use Beat. They are found in four of the eight boss stages. You will need the Rush Power Adaptor and the Rush Jet to be able to find the icons.
B - This is found in Tomahawk Man's stage. Near the end of the stage after the second Met machine, you should notice that there are two ways to go from the next platform, above it and below it. Use the Rush Jet to go below it and continue on. Eventually you'll fight Tomahawk Man for the part.
E - This is in Yamato Man's stage. When you come to the area where there are two ladders, one leading up and the other down, use the Rush Jet to reach the top one. Continue on and eventually you'll fight Yamato Man for the part.
A - In Knight Man's stage, near the end of the stage you should see a green crumbling block blocking off an opening in the floor. Use the Power Adaptor and use a charged shot to break the block. Keep going and eventually you'll have to fight Knight Man for the part.
T - In Centaur Man's stage, just before the final door at the top of the ladder near the waterfall, you should see to the right a door high up on the wall. Use the Rush Jet to get to the door and go in to fight Centaur Man for this part.

Mega Buster:
The Mega Buster is Mega Man's primary weapon. You will have this weapon from the start of the game. This weapon can cause damage to most enemies encountered in the game. You can also charge up the Mega Buster to release a stronger shot.

Knight Crush:
This weapon fires out a small spiked ball which will fly out in a circular fashion from Mega Man and will then return to him. It can damage most enemies that hit the projectile.

Centaur Flash:
This weapon will cause everything on the screen to freeze for a second once fired. This can also be used to damage certain enemies.

Wind Storm:
This weapon fires a small wind tornado that will fly along the ground until it hits something. This can damage most enemies.

Flame Blast:
This weapon fires out a fireball that will engulf certain enemies and if it hits a wall it will become a large fire-wall that will burn for a few seconds, acting as a barrier to enemies.

Blizzard Attack:
This fires out four ice-type projectiles that will fly out in an arc from Mega Man. This allows the projectiles to strike more than one enemy at a time.

Plant Barrier:
This creates four small spheres around Mega Man that can protect him against enemy attacks. If a projectile or enemy hits the barrier it will damage the enemy and disappear.

Silver Tomahawk:
This fires out a large spinning blade that will fly forward and damage any enemy that hits it.

Yamato Spear:
This fires small spear-head projectiles which can be fired rapidly to cause more damage to enemies or hit more on the screen.
Final Passcode:

Secret Passage in Wily fortress:
There are a couple of them. Generally however they are merely alternate routes which happen to include goodies such as Energy Tanks along the way. You don’t find anything earth-shattering there.
Ending:
This is one of the three or so endings where Wily’s fortress actually doesn’t blow up or collapse or anything. Mega Man actually manages to catch the scientist, and he promptly turns him over to justice. In this game you see a close-up of Mega Man firmly holding onto a bound and secured scientist. Then you see Wily ranting and raving right before prison bars appear in front of him. Before the credits the game demos the Robot Masters (instead of just listing them) to a medley of their stage tunes. Then after the credits, on a black screen with stars, comes the text “To be continued...”