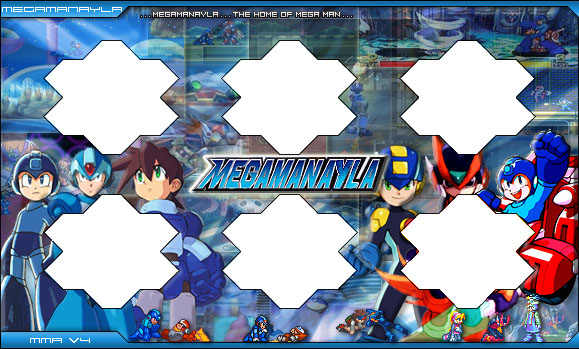 Choose a letter in order to go to the term you want that starts with the letter:


A:
Aberrant Unit - a term given to units that malfunctioned and/or threatened to harm the Master System of Elysium; similar to the Mavericks in the Mega Man X series.
Active Buster - see Homing Missile
Adapter Plug - device that allows MegaMan to equip three Buster Parts instead of two.
Amelia - mayor of Kattelox Island and former student of Barrell Caskett.
Appo & Dah - younger twin brothers of Shu.
Aqua Blaster - a special weapon from Mega Man Legends 2 which acts a fire extinguisher.


B:
Barrell Caskett - professor, grandfather of Roll, and adopted grandfather of MegaMan.
Birdbots - double-dealing robotic servants of Glyde; found in both Misadventures of Tron Bonne and Mega Man Legends 2.
Blade Arm - a special weapon that performs just like Zero's Z-Saber from the Mega Man X series .
Bluecher, Verner Von - veteran digger and owner of the Sulphur- Bottom. He and Barrell Caskett were the first to return from Forbidden Island alive.
Bola - a pirate character from Mega Man Legends 2; partner of Klaymoor.
Bon Bonne - the youngest member of the Bonne family.
Bonne Bazooka - the most powerful weapon available for Tron's Gustaff; this fires a slow but very powerful bazooka.
Bonne family - family of Sky Pirates that constantly plagues MegaMan throughout the series.
Buster Cannon - a special weapon from Mega Man Legends 2 that's similar to the Active Buster, but fires a small blue beam one at a time instead of a missile.
Buster Part - a generalized name given to the parts MegaMan can add to his Mega Buster.


D:
Dantz - an inept digger from Misadventures of Tron Bonne.
Data - MegaMan's primary storage device and best friend.
Digger - a person who goes into the ruins in search of treasure with the help of a partner called a Spotter.
Drill Arm - a special weapon that can be used to drill enemies or weak walls in the ruins.


E:
Elder System - an old system that was replaced by the Master and his allies with the Master System long ago.
Elysium - the special planet that houses the Master System and its attendants, which in turn are in charge of all the Carbons on Terra.
Elixur of Youth - a mysterious treasure from Misadventures of Tron Bonne that is uncovered by finding three kinds of crystals.


F:
Favorite Servbot - name given to the special Servbot whom Tron selects to wear the Red Head Parts and take over for her while she's resting.
Forbidden Island - A mysterious arctic-like island surrounded by a maelstrom and where the Mother Lode is said to be.
Finkel - the machine used by Tron in Misadventures of Tron Bonne to monitor her Servbots in the Shala-Kan Ruins.
Flutter - name of the Caskett family's airship.


I:
Inafune, Keiji - creator of the Mega Man series.


M:
Machine Buster Arm - a special weapon that rapidly fires small bullets just like a machine gun.
Machine Gun Arm - see Machine Buster Arm
Manda Island - warm temperate island from Mega Man Legends 2; Pokte Village is the capital.
Master - the character identified as the last surviving human being; he ruled Elysium for 3000 years until his death.
Master System - the current system in place on Elysium created by the Master and his allies as a replacement of the Elder System over 3000 years ago.
Maude - a short-tempered digger from Misadventures of Tron Bonne.
Maverick - a classification given to MMX series-era Reploids that chose to rebel; these can be connected to the Legends series' Aberrant Units.
Maverick Hunter - a classification given to MMX series-era Reploids who hunted down the Mavericks; X and Zero were among the elite in this grouping.
Mega Buster - MegaMan's main weapon, similar to weapons of the same style in the Mega Man and Mega Man X series, with the exception that it cannot be charged up.
Mega Man Battle Network series - an alternate series of games that features advanced internet technology; this series does not connect timeline-wise to the other four.
Mega Man series - the series of games that took place in 20XX that chronicled Mega Man's battles against Dr. Wily.
Mega Man Legends - the first title in the series.
Mega Man Legends 2 - the second title in the series.
Mega Man Legends series - the current series dealing with the Diggers, Sky Pirates, and their quest for refractor energy.
Mega Man - the main hero of the Mega Man series.
Mega Man Trigger - name of MegaMan Volnutt in his past life, when he was a Purifier Unit designed to guard the Master System.
Mega Man Volnutt - the main character of the Mega Man Legends games.
Mega Man X - main hero of the Mega Man X series.
Mega Man X series - the series of games that took place in 21XX that chronicled X and Zero's battles against Sigma.
Mega Man Zero series - the series of games that took place in 22XX that chronicled Zero's fights against the oppressive Neo Arcadia.
Misadventures of Tron Bonne - a prequel to Mega Man Legends that features Tron trying to rescue her brother Teisel from Lex Loath.
Mother Lode - the mysterious prize sought in Mega Man Legends 2 that was once thought to be an infinite source for refractor energy; it turned out to really be Elysium's primary Carbon Reinitialization Program, capable of wiping out all life on Terra.
Mother Unit - the head of either the Elysium or Terra systems.
Mother Zone - the area of Elysium that houses the main Carbon Reinitialization Program.


R:
Reaverbot - the primary enemy found in the Legends titles, these robots are often very large and very dangerous.
Reflector Arm - a special weapon from Mega Man Legends 2 that fires large BB-like projectiles that can bounce off a wall and explode.
Refractor - the main energy resource of Terra. Small refractors are used mainly as currency, while large ones can be used to power airships and other machines in addition to being sold.
Reploid - a name given to the MMX series-era robots that were capable of thinking and making their own decisions based on advanced AI.
Rockman Dash - the first title in the Japanese series.
Rockman Dash 2 - the second title in the Japanese series.
Roll Caskett - granddaughter of Barrell and adopted sister of MegaMan; she serves as the mechanical genius of the Caskett family and is MegaMan's spotter.
Roxette - a flashy digger from Misadventures of Tron Bonne.
Ruminoa City - the capital city of Nino Island.
Russell - a veteran digger from Misadventures of Tron Bonne.
Ryship Island - the island where Misadventures of Tron Bonne takes place.


S:
Saul Kada Island - a hot desert island in Mega Man Legends 2; Kimotoma City is the capital.
Sera - the Mother Unit of Elysium and final boss of Mega Man Legends 2.
Servbots - small Lego-like robots that were created by Tron Bonne to serve the Bonne family.
Servbot Borer - a special drilling machine used to drill through weak walls in Misadventures of Tron Bonne.
Servitor Unit - primary assistant to a Mother Unit.
Shield Arm - a special weapon that allows MegaMan to protect himself from enemies and their attacks with a Zelda-like shield (Mega Man Legends) or aura (Mega Man Legends 2), but prohibits him from using weapons.
Shining Laser - a special weapon that fires a huge laser that can cut through multiple targets and defeat bosses in seconds; easily the most powerful weapon available to MegaMan.
Shu - the older sister of Appo & Dah.
Sky Pirates - name given to the Diggers who patrol the skies and raid other ruins sites in search of treasure.
Splash Mine - a special weapon that plants land mines that will explode upon being touched.
Special Weapon - term given to an alternate weapon that MegaMan can use instead of his Mega Buster.
Spotter - a person who assists a Digger by staying above ground, giving advice, and warning of any nearby dangers or treasure.
Spotter's Car - Roll and MegaMan's main form of ground travel in Mega Man Legends.
Sulphur-Bottom - the name of Verner Von Bluecher's airship.


T:
Teisel Bonne - leader and oldest member of the Bonne family.
Teasel Bonne - alternate spelling of Teisel Bonne.
Terra - the planet the carbons or people live on, though it's really just another name for Earth.
Treasure Box - boxes found inside the ruins that contain zenny and other important items.
Tron Bonne - middle child of the Bonne family and creator/mother of the Servbots; she serves as the mechanical whiz of the family.
Tron Ni Kobun - the Japanese counterpart of Misadventures of Tron Bonne.
Tuttle - an eccentric digger from Misadventures of Tron Bonne.


U:
Uncle Digg - a mysterious old digger from Misadventures of Tron Bonne.


V:
Vacuum Arm - a special weapon that sucks up nearby zenny and other collectible objects in the ruins, just like a vacuum cleaner.